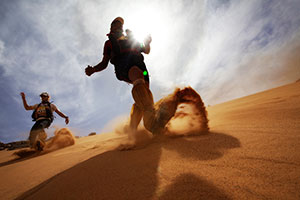 The Marathon Des Sables (or MDS) is a 150-155 mile (240-250km), seven-day stage race conceived and organized by Frenchman Patrick Bauer and Atlantide Organisation Internationale. While the event can be very demanding if you are racing, the daily time cut-offs are generous enough to allow someone to power-walk the entire distance. Consequently, it is not necessary to be an elite runner to take part in the Marathon Des Sables.

During the event, competitors run on foot through some of the most beautiful, remote sections of the Moroccan Sahara while carrying a backpack with essential gear, food, sleeping bag and clothing for the week. The race organizers provide water (generally 10.5-12 liters per day) and a traditional, two-sided Berber tent each night for sleeping during the seven days of racing.

Runners are typically given 32-36 hours to complete the “long” (50 mile/ 80km stage, depending on the terrain and distance, with most finishing the stage in one day. This essentially provides most people with a rest day in between the 50-mile stage (80km) and the Marathon stage. Each year brings a new course, which is not revealed until two days before the race. It’s possible to run as a team (with a minimum of 3 participants), however, team rankings are based on the cumulative time of each individual runner on the team. 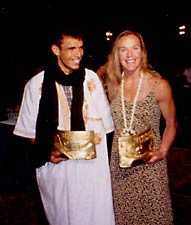 The terrain at the MDS is not all giant sand dunes. In fact, most of the course is run over salt flats, dried river beds, rocky desert plains, and ancient, dried up lakes. And, it is not uncommon for the course to wander through a remote desert village. The course is usually well marked and all competitors receive a “Road Book” which provides an official course description for each stage. The rocky terrain can be technical and demanding.

Temperatures can be extreme, with possible daytime highs reaching 125°F (51C) and night-time lows of 38°F (3C). Additionally, the occasional sandstorm can add to the mix. Thus, competitors should be prepared for anything.

There is a full-time staff of professionally trained doctors that follows the race, however, each competitor is required to carry at all times a snake bite kit, emergency blanket, signal mirror and SPOT tracking device (provided by the race organizers during race check-in). The Medical Team is highly trained and is fully equipped to treat heat-related illnesses, blisters and other medical emergencies that might arrive over the course of the seven days. Should the need arise for serious medical treatment during the event, the Race Organization can utilize their helicopters to assist with an emergency evacuation.

The official Rules and Rregulations for the Marathon Des Sables can be found by clicking here.  All participants are required to read and review these regulations thoroughly as the organizers are very strict about time penalties.

~7-8am (estimated): – All competitors rendezvous in Errachidia, Morocco  and board buses to the first bivouac. (The location of first bivouac, and the actual race course, is not known until we board the buses.)

~7:30am: Breakfast provided by race organizers

9am – 3pm: Administrative & Medical check-in begins. We will check-in according to race numbers; times will be posted at the bivouac.

~6am: Tents dismantled; breakfast is self prepared from your food supply.

Check points: water is distributed at each check point – the amount will be marked clearly on the race ration card; medical assistance available at each checkpoint (and at points along the course)

Arrival at bivouac: Distribution of 6L of water; dinner is self prepared; email & sat phone tent open to competitors.

Box lunch provided; board buses for return trip to Ouarzazate; dinner at hotel (Post race hotel is included in the entry fee and assigned by the race organizers during the actual event. Therefore, we do not know which hotel we’ll be in post-race until late in the race, typically on the morning of the charity stage.)

Lunch on your own in Ouarzazate

8pm: Dinner at the hotel (included in race entry fee)

Times vary: Most competitors depart OZZ (but you are free to leave any time after our return to OZZ on Saturday).