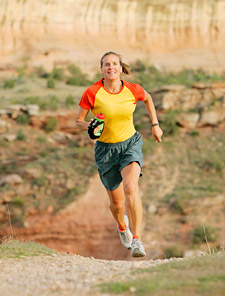 Lisa Smith-Batchen – Endurance Athlete & Personal Coach Stories about Lisa’s athletic achievements have appeared on the covers of The NY Times, The LA Times, The Washington Post and Winning Magazine. Additionally, she has appeared in Runner’s World, Sports Illustrated for Women, ESPN Magazine, Outside Magazine, Ultrarunning, Trail Runner, Running Times and numerous other national and international publications. Look for feature stories about Lisa’s 2,500 mile run through America in Runners’s World (Jan. 2011) Women’s Adventure (Nov. 2010) Ultra Runner Magazine (April 2011) Lisa is the first and only person to run 50 miles in all 50 states in the USA in 62 days as part of her Running Hope Through America fundraising project! Lisa was the first American female to win the Marathon des Sables, a 150 mile stage-race  through the Sahara desert. Additionally, she has twice won the Badwater Ultramarathon (135 miles through Death Valley). Lisa is the only person to run from Las Vegas, NV to the summit of Mt. Whitney, covering 306 miles and was the first female to complete the “Badwater Quad,” covering 584 miles! Television coverage on Lisa includes segments on ESPN, Discovery Channel, ABC’s Wide World of Sports, NBC’s Nightly News with Tom Brokaw and Good Morning America. In 2010 Lisa was featured on CNN and on newscasts in 47 states. She was a main character in a feature length film on the Badwater Ultramarathon, entitled Running Under the Sun. She has also appeared in two Outdoor Life Network specials on the Marathon des Sables. Lisa has done product testing for The North Face, an outdoor equipment and clothing company, and has appeared in their product catalogs and a national advertising campaign with Dean Karnazes. She is a past member of the Montrail/Patagonia and Smith/Pearl Izumi Ultrarunning Teams and has been also sponsored by Clif Bar, Petzl, Pharmanex, Smartwool, Sharkies, Nathan, Nuu-Muu, Nuun, Smith Optics, Body Glide, Engo, Hammer Nutrition, Kinesys, Salt Stick, Crescent Moon Snowshoes, Freelife, Damascus Bakeries, Nike, Crocs, Coco 5, Coco-Elite, Ceregumil, Styr Labs and Trail Toes. Click here for links to Lisa’s sponsors. 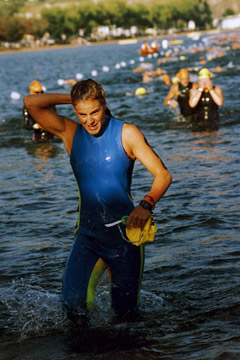 Lisa is accepting new coaching clients.
If you have questions e-mail her at lisa[at]dreamchaserevents.com.
If you're ready to get started use the client sign-up form.